For over a decade, Scotty has started the new year by traveling to Hawaii for the first full field PGA Tour event of the season. Heading to Waialae Country Club for the Sony Open gives him a unique opportunity to work with Tour players in a beautiful setting, introduce new putter prototypes and, of course, give out his highly anticipated Circle T Hula Girl headcover.

Cool new Circle T headcovers aside, Scotty's real mission in Hawaii is to meet with players on their turf. Throughout the year many players make the trip to his Putter Studio in California for an in-depth session that can range from a simple putter tune-up to a full-blown putting session under the Studio's lights and cameras. This time out on Tour meeting with players to discuss the intricacies of putter design and performance is something Scotty has been doing for over 25 years. It’s also his first opportunity to introduce new 2017 putter models to Tour players and have them put to the test in competition.

"Of course I love going to Hawaii for everything it has to offer. Everyone is in a laid back, casual state of mind. But, the pros still have a job to do. I love getting my new models into their hands to see what they think. Because what I introduce in Hawaii has been developed over the previous year based on player preferences and feedback. I show up on the practice green and guys are ready to talk putters. It’s a great working environment," says Scotty with a smile.

And the recipe continues to hold up over time, as the young guns like back-to-back event winner Justin Thomas and others enjoy the opportunity to meet with him in person. When you're the world's most passionate putter maker, players who game your equipment love to share their feedback.

In what has become an annual celebration of a special place and time, Scotty’s Hula Girl headcover is given to Tour players who have loyally gamed a Scotty Cameron putter over the past season. To accommodate the variety of putter styles and shapes touring professionals trust, he arrives with standard, mid-mallet, mid-round and even mid-square configurations so everyone has a chance to put a For Tour Use Only Hula Girl headcover in their bag during competition.

Check out a collection of images below taken from Scotty's trip to the Sony Open. 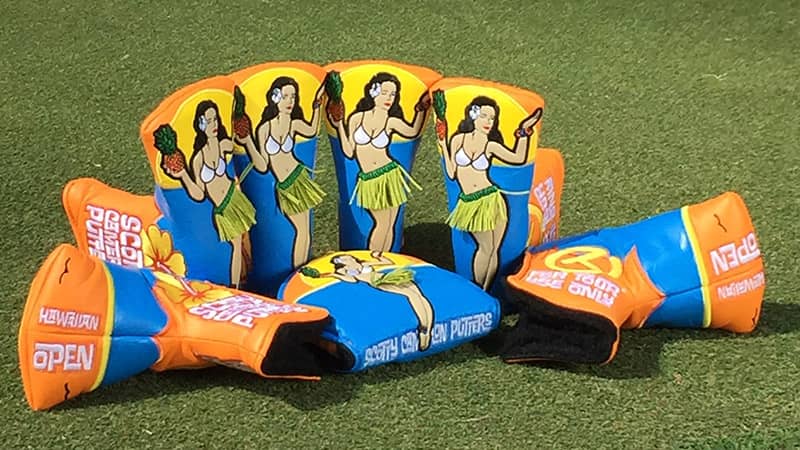 Click here to see our On Tour slideshow from this year's Sony Open.